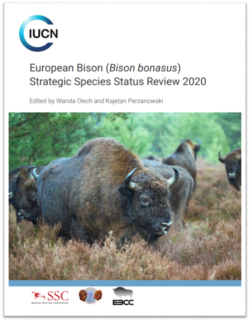 This report has been prepared 17 years after the publication of the first „Status Survey and Conservation Action Plan” for the European bison Bison bonasus, (the wisent). (…) This report was prepared by a team of 32 experts representing 15 countries, both having European bison only in captivity as well as those also managing free-ranging herds of this species. Among the authors, there are 19 members of IUCN SSC Bison Specialist Group and 13 are active in European Bison Conservation Centre. Therefore hopefully this document covers the whole range of issues necessary for the preparation and implementation of a long term strategy that allows for further effective protection of this species. The aim of this report is to provide possibly the most current, detailed knowledge on the species´ status all over the continent, and contributing co-author views of how to improve its present situation in terms of population parameters, health and welfare, accessibility of optimal habitats and conservation measures. The accuracy of proposed solutions and measures will be possible to be evaluated generally – on the basis of subsequent trends in European population of the species and locally – upon the development of free-ranging, viable herds. 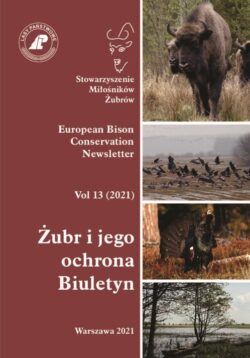 The aim of the journal is to disseminate the results of scientific research on the genus Bison. A characteristic feature of the Scientific Council of the journal is the intensive cooperation of its members with breeders and keepers of herds as well as the implementation of species protection projects. Thanks to this, the journal is a communication platform, and the published works have great application potential. The Scientific Council is created by an international research community, and the added value is the intense cooperation between scientists involved in the protection of European bison (wisent) and American bison, associated within the IUCN SSC Bison Specialist Group.

European Bison Conservation Newsletter is a fully accessible online annals in which scientific materials (peer-reviewed scientific articles and non-peer-reviewed popular science articles) written by Polish and foreign scientists are published. Cooperation with research centers in Poland and around the world contributes to the internationalization of the affiliation of the authors, reviewers and readers of the Newsletter, which allows increasing the recognition, range and building the prestige of the journal.

This website uses cookies to provide services at the highest level. By continuing to use the site, you agree to their use.AgreementFind out more